Kilbridge: Don’t ‘bury your head in the sand’ on telehealth

Peter Kilbridge, a senior research director at the Advisory Board provides input on some of the obstacles providers face when considering the implementation of telemedicine.

May 6th 2015 by The Daily Briefing Sam Bernstein

For providers, the biggest telemedicine challenge is getting reimbursed for it.

The Texas Medical Board recently limited telemedicine services in the Lone Star State, prohibiting doctors from writing prescriptions for patients with whom they have not already established a relationship during an in-person visit.

The Daily Briefing’s Sam Bernstein sat down with Peter Kilbridge, a senior research director at the Advisory Board and telemedicine expert, to understand how the Texas decision fits into the broader telemedicine landscape and what forward-thinking providers are doing in the space.

Question: The decision by the Texas Medical Board to limit telemedicine in the state has gotten a lot of attention. But how does that decision fit with broader telemedicine trends in the United States?

Peter Kilbridge: The Texas decision caught headlines because it is an outlier. What they said is contrary to the common practices we see in lots of other markets and contrary to the business model of a number of the providers I work with.

This is hard because, when it comes to what services they will reimburse, insurance companies have fairly traditional language about what constitutes a physician-patient encounter from their point of view. That is changing, but it’s slow to change. Some payers are hesitant to open the floodgates on reimbursement.

Payers are starting to realize that by reimbursing relatively low-cost encounters for telemedicine initially, they may be able to avoid much more expensive traditional encounters later. But the overall balance of that trade-off is not known. In other words, if more telemedicine encounters were immediately reimbursable, would utilization increase for relatively minor medical issues and increase costs for payers because of high volume? Versus would the balance be that they are preventing far more expensive encounters by allowing patients to resolve issues early? Nobody knows the answer to that. The experiment hasn’t been done.

Q: Who makes those decisions about how to reimburse telemedicine?

Kilbridge: The individual payers certainly have their own rules about what they will and will not pay for.

However, their rules are subject to the laws of the state where they’re operating. A significant number or states, something like half, have telemedicine parity laws requiring payers to reimburse for services.

Q: Do you foresee the scope of practice for telemedicine providers being restricted by regulatory or reimbursement limitations? What types of encounters might be excluded from telemedicine?

Kilbridge:  From the reimbursement angle, I think that the vast majority of telemedicine services are going to become reimbursable. In terms of scope of practice, I think the viability of different types of encounters comes down to professional discretion.

Think about how the system is set up today, how it has been for years.  Let’s say I have my primary care doctor and I see him once a year. We do not have a close relationship, but he has my medical record. If I develop a fever and rash and I’m mildly worried but not so much that I’m going to go to the emergency room, I can page my doctor. If he is not available, I can get in contact with someone who is covering his service. This kind of thing happens all the time

The covering doctor does not know me, has never met me. They may have access to my medical record, or not. I can ask the covering physician to give me a medication that will tide me over for the weekend. That person today, legally, is able to prescribe a medication for me. They’ve never seen me. They’ve never met me. My relationship is not with them, but with someone else in their practice.

If you think practically about the difference between that and a telemedicine encounter with someone that you haven’t met before, it’s not a big difference.

Q: If there is little substantive difference between many telemedicine encounters and the scenario you just described, what do you think the source of some of the regulatory anxiety around telemedicine is in Texas and elsewhere?

Kilbridge: Some providers are afraid that they are going to lose patient care to these services. I would say though, that the reality is if you’re making that argument, what you’re doing is burying your head in the sand. Because this is happening. It is being adopted, patients want it.

How providers should think about telemedicine

Q: How should a provider organization approach telemedicine?

The more forward-thinking provider organizations are embracing it. First, because those same organizations tend to be the ones who are engaged in at-risk population health management and they see very clearly that they have an incentive to provide people convenient and less expensive options for care so that they don’t lose them to someone outside the network.

Secondly, because when you provide that kind of care, you do avoid greater costs down the road by heading problems off early. Enlightened provider organizations see this as an absolutely essential component of the future of health care provision and increasingly as part of their essential core portfolio.

Q: What do you say to smaller organizations thinking about launching telemedicine services? What are the barriers to entry?

Kilbridge: What the current environment makes hard is getting reimbursed. But you can carry your costs with your patients; there’s no law against that. You can say, “I’ll charge you $50 to do a 20-minute telemedicine encounter.” Many vendors are charging such a fee as part of their model, and you can do that as a provider organization, too.

In the great majority of the country, you can do most kinds of telemedicine encounters legally. Whether or not you get reimbursed is a different question. If you are in the ACO and managing a large risk contract, it makes financial sense for you to offer patients this avenue for greater access. You’re likely to also benefit, not just by keeping them in network, but by heading off more severe issues.

Q: We’ve talked a little about how payers and states are approaching telemedicine reimbursement. How does Medicare treat it?

Kilbridge: Traditionally, Medicare has paid for rural health encounters when the patient is outside of a metropolitan statistical area. There are some exceptions. But the basic idea is that Medicare traditionally pays for telemedicine services delivered to rural patients.

There’s also the Medicare “Next Generation” ACO, which has in its regulations the ability to reimburse for a very wide degree of range of services.

Where hospitals are most likely to embrace telehealth

Q: What about Medicaid?

You know, there are payers who are starting to see the light on this and to reimburse for these encounters. There’s another category which is the payer that is actually starting to cut out the middle man. They are offering telemedicine visits directly to their members. Because the payers are starting to figure out that it is going to save them money. Providers should be concerned by this.

Q: What do you see as the future of telemedicine? What is this space going to look like in five years? 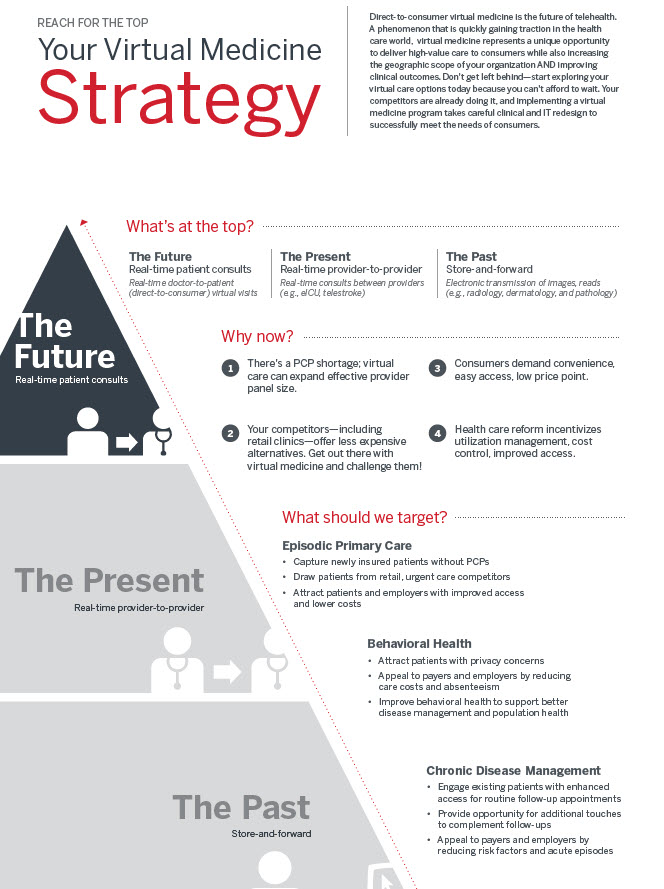